Time to talk about the Rays again. I didn’t plan to write about them again, but then last Wednesday, Sergio Romo played 3rd base. The Rays used a very unique version of the Waxahachie swap. The Waxahachie swap is a maneuver in which the manager will move a pitcher (usually a lefty) to another position for one batter and then bring him back in to pitch to the following batter. For example, if the opposing team has a left-handed batter hitting 1st and another lefty batting 3rd in the inning, the manager could use this swap in order to have the platoon advantage (lefty vs. lefty) on both of those hitters without using up a bunch of bullpen pitchers for just one hitter each.

Usually, the team will move the pitcher out into left field or somewhere and hope the ball won’t be hit to them. The Cubs and Joe Maddon began using Waxahachie swaps back when the Cubs had pitcher Travis Wood and even used it with Pedro Strop. One of the most memorable of these being when Travis Wood switched into left field during Sunday Night Baseball exactly 2 years ago, on July 31, 2016. It was memorable because it was the most amount of batters a Waxahachie swap has ever been used for: 6 batters. Yeah, let’s not forget that Travis Wood played left field for 6 batters! As you can see below Wood actually had to make a play on a ball. This Travis Wood situation isn’t an advantage or analytics based, the Cubs definitely didn’t want the ball hit to left field, but it does show how the Waxahachie switch provides another level of excitement for the fans. As Aaron Boone says in the video, “this is awesome”.

Only 35 Waxahachie swaps have occured in MLB history, there have been just 3 this season (Rays with Romo at 3rd, Rays with Jose Alvarado at 1st and the Cubs with Steve Cishek and Brian Duensing in LF). The swap was used once in 1908 and once in 1909, then was not seen again until 1951. From 1951 to 1955, White Sox and Orioles manager Paul Richards used it 4 times and reintroduced it to the game. Richards was from Waxahachie, Texas and nicknamed “the Waxahachie wizard”, thus the name “Waxahachie swap”. More recently, after Lou Piniella used the swap in 1993, it was not seen again until 2008 when Bobby Cox used it for the Atlanta Braves. Lou Piniella then used it again in 2009 with the Cubs. Since then they have occurred maybe once or twice a season.

When you look into it more, this particular decision makes a ton of sense. Right-handed pitcher Sergio Romo came in and recorded the last two outs of the 8th inning to get the Rays out of a jam and preserved the lead in Wednesday’s game against the Aaron Boone’s Yankees. Romo then started the 9th inning playing third base, while lefty Jonny Venters came in to face the Yankees left-handed first baseman, Greg Bird. Matt Duffy, the Rays regular third baseman moved to shortstop and the shortstop, Willy Adames, came out of the game when Venters entered. The Rays had a 3-2 lead in the 9th inning at this point so every at bat is huge. Romo is the Rays most trusted pitcher vs righties and that’s why you want to keep him in the game here to face the batters after Greg Bird. Greg Bird was also being heavily shifted by the Rays here too. 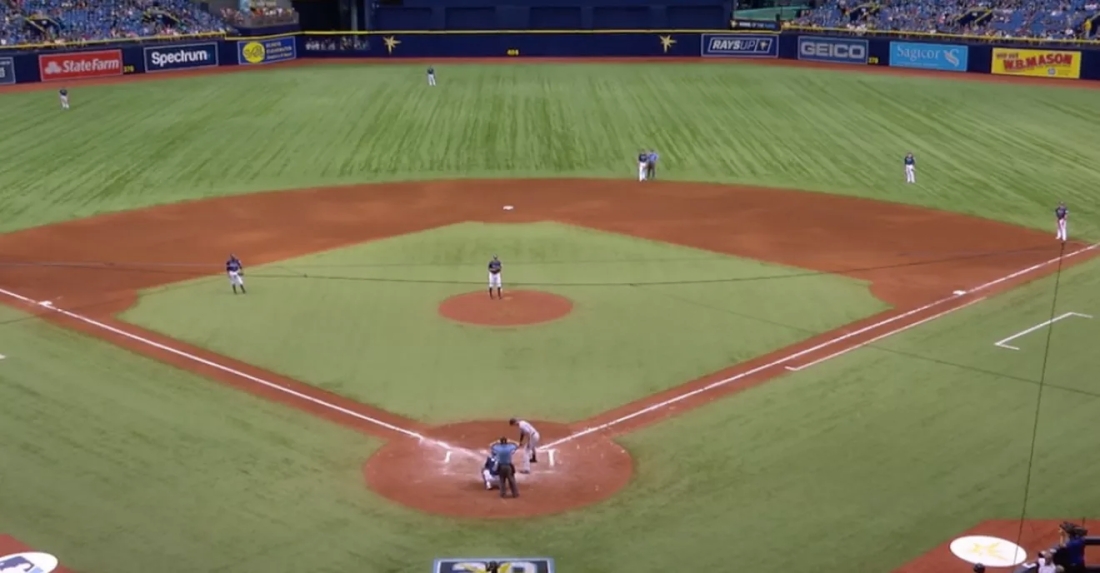 As we see here, Sergio Romo is the only player on the left side of the infield. The Rays must then think this is the least likely area Greg Bird would hit the ball and yes, that is very true. 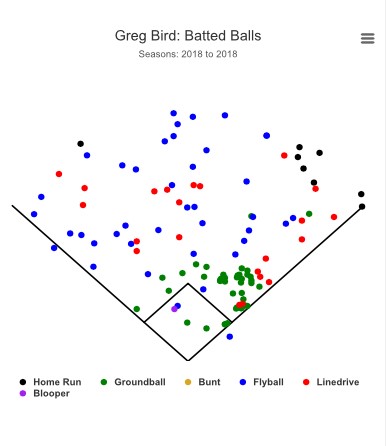 When looking at the spray chart above of all of Greg Bird’s at bats this season, we see a very few number of ground balls to the left side. So first off we see why there is such a big shift for Greg Bird and secondly we know why Sergio Romo is positioned at third. 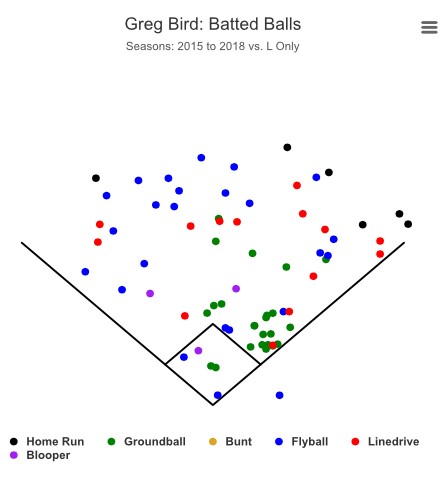 If we look at the data for the situation even more in-depth, it makes even more sense. This spray chart shows every at-bat of Greg Bird’s career against left-handed pitchers. Greg Bird has literally never hit a ground ball to the left side against a lefty. So there is just about no chance Sergio Romo would have to do anything defensively.

Of course, Greg Bird grounds right into the shift, Romo comes back in to pitch, Adeiny Hechavarria comes into the game to play shortstop and Matt Duffy moves back to third. Romo goes on to earn a very unique four out save. Below is a video of Romo’s outing on Wednesday.

Published by Will McClaughry